The NBA season started yesterday but that doesn’t mean that TSB can’t roll out their preview in Baggydizzle style (a day later). Time to drop some predictions! As a heads up, the numbers in parenthesis to the right of each team stand for my prediction of what seed they will be in the playoffs. On to the predictions!

The non-NY teams in this division are the pits. Boston and Philly are definitely rigging for Wiggins. Toronto may try to be a playoff team but they also have the potential of trading Rudy Gay and then trying to tank as well. If you listened to TSB radio last night, you’d know that I think the Knicks have a large possible range of outcomes….they can either be the 5th seed or the 8th seed because of all the personalities they have on this squad. Carmelo can’t do it by himself. Too much patron and not enough pride. After all the moves the Nets made, they improved their team enough to win the division and possibly collect social security.

The best division in the East. The Bucks are a solid team that I can see sneaking into the playoffs but they don’t have a true #1 guy. The Cavs are another team that can sneak their way into the tournament but I feel like they should be applying for Obamacare or investing in steroids. This squad is way too injury prone. The Pistons have a strong enough back court and an exciting enough PG where I wouldn’t be surprised if they surprised a few people and jumped to the 5th seed. Sure, Derrick Rose is back but do they have enough outside shooting to stave off Miami and Indiana? The Pacers probably have the most well rounded and balanced squad in the NBA.

LOL Michael Jordan is still an owner? Shouldn’t he just be selling shoes? I like some of the talent on Orlando but they just aren’t ready yet. Horford is ready to make the jump this year for the Hawks. The Wizards are my prediction for the team that surprises everyone. John Wall is also ready to make the jump, Beal is a healthier version of Eric Gordon, and they have a few solid big men that can put in work. The Heat are going to Heat and Lebron is going to Lebron.

Utah has a couple of promising pieces in Kanter, Favors and Hayward but they need to improve their guard play. I’m not sure that Trey Burke is the answer. Denver still has a lot of nice pieces but I feel like they’ve lost too much on the perimeter defensively to get back into the playoffs with the losses of Iguodala and Corey Brewer. I love the Rubio and Love combo and if they stay healthy this year, playoffs or bust. Portland did a hell of a job of getting deeper and putting players around Aldridge, Batum, and Lillard. OKC takes a step back this year because they miss a month of Westbrook and they don’t have enough outside shooters.

The Suns are trying to compete with the Sixers for the worst roster in the NBA and the team most likely to tank for Wiggins. The Kings are officially Demarcus Cousins’ team after he signed a lucrative contract extension. I’m still wondering if that’s a good thing or not. LOL the Lakers are terrible this year. Outside of Pau and Kobe (who’s probably out until Christmas), there are no NBA players on this roster. If you’re going to tell me Steve Nash, I’m going to tell you that wheelchair basketball doesn’t work in the NBA. The Warriors are going to be high powered on offense and improved on defense with the addition of Iguodala. The additions of Doc Rivers as coach and Jared Dudley and JJ Redick make the Clippers a much more dangerous team than last year. Now they just need CP3 to stay healthy the whole year.

This is the best division in the NBA. The Pelicans add Tyreke Evans to their talented roster but I’m not sure if all the pieces fit. They’ll just miss the playoffs. So will the Mavs even though they’ll get a renaissance effort from Dirk. The Grizzlies needed more shooting and they acquired Mike Miller but is that enough? Popovich and the Spurs are a well oiled machined that got better with the signing of Marco Belinelli. The only thing that can keep this team from it’s goal is Father Time which is what we say every year. What can I say? I feel like the Rockets are improved enough with Dwight Howard that they have a chance to go to the promise land.

Rookie of the Year:

Victor Oladipo is going to runaway with this. Zeller is going to be good and Olynyk will also turn some heads but Oladipo is the real deal. He’s going to make a difference defensively and if he learns to shoot more consistently, he’ll have a shot at being an all star.

NBA 6th Man of the Year:

Evans is going to come off the bench and do it all for the Pelicans second unit. Well, do it all except hit jump shots. Jamal Crawford is probably the single greatest heat check player in the NBA right now. Andrei Kirilenko is going to be a do it all forward for the Nets. Score off the ball and with the rock, rebound, hit jumpers, and play great on the ball and help defense. I wasn’t on board with the Nets being better than the Knicks until they signed Kirilenko.

NBA Coach of the Year:

The coach of the year award is bullshit. It usually goes to the coach who led the biggest turnaround in the NBA in terms of record. The NBA writers that vote on this are a lazy lot. I think Gregg Popovich and Tom Thibs are the best coaches in the NBA but the three dudes that I listed above are the ones that will make the type of difference that the writers love.

This award is mostly bullshit too. A lot of the time, the player that gets more minutes than he did the season before but didn’t necessarily get a lot better gets this award.

NBA Defensive Player of the Year:

Lebron is both one of the best one one one defenders and help defenders in the NBA. When he sets his mind to it, he is just a load to deal with when he’s guarding someone. Ask Tony Parker about his NBA Finals experience last year. Roy Hibbert trained with Tim Duncan over the offseason and supposedly added 10-20 pounds of muscle. He also made quite the difference on defense last year during the playoffs. However, Dwight Howard is healthy this year and ready to take his crown back. 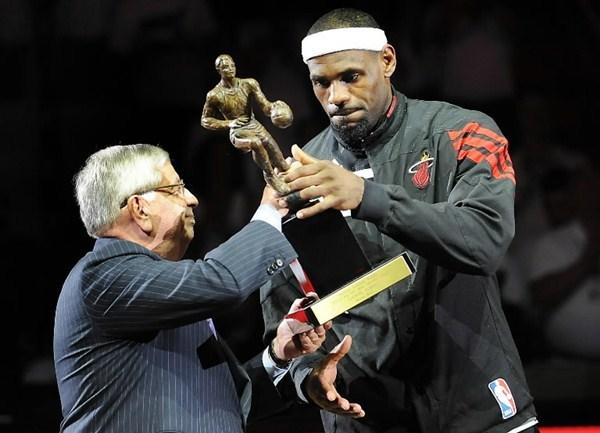 As good as CP3, Harden and Durantula are, they aren’t Lebron. Lebron is one of the greatest players of our lifetime and the only man that deserves to be mentioned in the same breath as the Gawd, Michael Jordan. Someone else may get it this year because the voters/writers are tired of giving it to Lebron but I hope they aren’t that stupid.

Houston Rockets over the Indiana Pacers in 6 games.

Huh? Where did this come fr……what? Yeah, I picked the Heat to finish first in the conference but I feel like the Pacers are built to exploit the Heat’s weaknesses. I’ve been going back and forth on the Pacers and the Heat for the past month but I’ve decided to be bold and pick the Pacers to beat the Heat. However, I feel like this is the Rockets’ year. They are going to be scary good. They were extremely efficient on offense last year and with Howard and Asik manning the paint and with the promotion of Beverly to the starting lineup, they are going to be much improved on defense as well. Watch out…..or just watch the Heat win again and the Jordan comparisons begin…….again.