Baggy Dizzle is a child of hip-hop who bleeds Knickerbocker orange and blue. In addition to contributing to TSB, Baggy also runs his own website, thebrownpaperbag.tumblr.com. Be sure to follow him on twitter @BaggyDizzle

Children grow up with a lot of trauma nowadays. I mean, we do live in an age where “Keeping up with the Kardashians” and “Teen Mom” are both hit shows. The sad thing is that both of those shows are about exactly what I’m talking about. The 7th episode of the 4th season of Game of Thrones deals with the trauma that many of the characters on the show have faced as children or about to and how they are dealing. Except for Brienne and Pod. They’re still looking for those dang Stark kids.  END_OF_DOCUMENT_TOKEN_TO_BE_REPLACED

What did the five fingers say to the face? Don’t answer that question.

I apologize for the tardiness this week but how about last night’s episode? I mean, there was a lot that went down but let’s frank. There were only two things that we cared about that happened in the episode:

Yeah, there were two other storylines but they felt like they were a part of the backdrop to the bigger events in this episode. Stannis getting the backing of the Iron Bank is a nice wrinkle that Tywin and his council will have to worry about. And I’m sure no one cares about the Ramsay Bolton/Reek (Theon Greyjoy) arc. The producers really need to chill with that story line. I don’t think I’ve talked to a single person that cares about it. It’s probably been the the worst park of Game of Thrones since last season.  END_OF_DOCUMENT_TOKEN_TO_BE_REPLACED

Family and friends are important people in your life and the 5th episode of the 4th season’s Game of Thrones deal and is the general theme of the episode. The forging of bonds between people, protecting the ones we love, trusting the ones closest to us, learning to let go of them, and how crazy some of our friends and family can be are some of the things that this episode analyzes.  END_OF_DOCUMENT_TOKEN_TO_BE_REPLACED 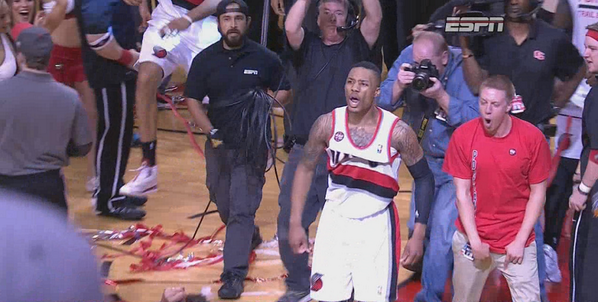 Damian Lillard of the Portland Trailblazers  has officially become the breakout star of the 1st round of the NBA playoffs this year. Dame Dash averaged 25 points per game and 7 assists per game while teaming up with LaMarcus Aldridge to do away with the Houston Rockets in 6 games. Let’s all get drunk during #LillardTime and bask in his glory while we watch him insert the nail in the coffin. END_OF_DOCUMENT_TOKEN_TO_BE_REPLACED

Make no bones about it. The Donald Sterling situation is messed up and is a black eye on the league. Thankfully, there is the internet and on the internet, you can make light of anything. That’s why I’ve decided to collect some memes and gifs of the Donald Sterling incident and break down what I liked or disliked about them. Onward, march! END_OF_DOCUMENT_TOKEN_TO_BE_REPLACED

Kyle Lowry causes Deron Williams To Look For His Socks

Awwwwwww, look at that picture of Kyle Lowry brushing the dirt of his shoulder. That dirty that he’s currently brushing off may be any trash spoken to him from Deron Williams or anyone thinking that Deron Williams is in the same tier as him in terms of the best point guards in the NBA. In terms of stats, actual play on the court, and basketball aesthetics, Kyle Lowry has been playing like one of the better point guards in the NBA this season. Last night, he showed it by utterly embarrassing D-Will with the play of the game last night. END_OF_DOCUMENT_TOKEN_TO_BE_REPLACED

Breaking Down Hipster Donatello from the New Ninja Turtles Movie

You remember this guy? Oh, I’m sure you do. The smart guy from the Teenage Mutant Ninja Turtles? He rocked a purple mask and had a big, long stick as a weapon. Yep, that’s right! That’s Donatello. Ah, nostalgia. I used to wake up on Saturday morning and watch him make contraptions, get into adventures with the other Ninja Turtles and everything felt right with the world. Well, everything was right until Michael Bay got his hands on the rights of the Teenage Mutant Ninja Turtles franchise. What you’ll see below is the new interpretation of what Donatello looks like. Brace yourselves.  END_OF_DOCUMENT_TOKEN_TO_BE_REPLACED

Game of Thrones Season 4 Episode 4 “Oathkeeper” Recap: “And Justice For All”

We all have a sense of justice. We all want it in some form or fashion. When we read books and watch movies, we usually root for the good guy for this very reason. Some of us spend time in our lives seeking retribution for the wrongs people may or may not have done to us or other people….even if they are for the most littlest things. This is what the 4th episode of the 4th season of Game of Thrones last night was generally about. END_OF_DOCUMENT_TOKEN_TO_BE_REPLACED

Oh, Game of Thrones, you sly dog. The 4th episode of the third season was true to it’s title from beginning to end. In the first scene, of the episode, Lord Baelish (MAKING HIS SEASON DEBUT AND SCORING 26 OFF THE BENCH), snatches the chain from Sansa’s neck (that’s a fight, bro), and proceeds to break the one of the jewels on it to prove its fakeness. At the end of the episode, Danny Targaryen looks to free the slaves of Mereen from there chains. Tyrion is chained in the dungeon. You see the chains of honor that bound the Starks in Arya start to break while the chain that binds Sam to Gilly start to erode. The death of King Joffrey has had a profound effect on most of the characters in this episode and everyone is either trying to break free, free someone, or attach themselves to someone or something.  END_OF_DOCUMENT_TOKEN_TO_BE_REPLACED

Game of Thrones Season 4 Episode 2 “The Lion and the Sword” Recap: Avoid All Weddings

If you thought this was going to be a normal recap of the 4th season’s 2nd episode of Game of Thrones, you are sadly mistaken. As cool as it is that Bran can hop into a Wolf’s body and use trees like cellular phones, I don’t care. I don’t care about how much Stannis loves his daughter and Melisandre cultivating a friendship with said daughter. Also, the writers of the Theon Greyjoy and Ramsey Bolton storyline could be thrown in to the fiery pits of Mordor and that would be completely cool with me because that part of the story holds no interest to me whatsoever. No, we are talking about the royal wedding that took up the last half of the episode which led to the death of one of the best characters on the show, Joffrey Baratheon.  END_OF_DOCUMENT_TOKEN_TO_BE_REPLACED