When you remove the constraints that society has placed upon you, are you a purer human than everyone else or are you someone that has lost touch with your humanity? I found myself asking that question while watching the last 2 episodes of last season and then watching last night’s season premiere of “Breaking Bad”. During “Live Free or Die” (which happens to be New Hampshire’s state motto), we see that Walter White has completely let himself go and has fully immersed himself into the Heisenberg alter ego. His moral compass is broken, he is arrogant, completely self absorbed, and has a complete lack of empathy for the people around him. However, during the introduction of the episode, we see a Walter White that contrasts with his Heisenberg persona that is prevalent through the rest of the season premiere. He is disarmed, paranoid, and grasping for straws as evidenced by him purchasing a machine gun at the end of the scene. This is a Walter White that is ready for war but it’s a war that he’s not sure if he’ll be able to come out alive from. We also find out that the introduction is a flash forward, like how Seasons 1, 2, and 3 started (Season 4 started with a flashback). Another Lost-ish element during the introduction is how Bryan Cranston pulls a complete Matthew Fox look from the Lost flashforwards…complete with the beard, hair grown out (Is the cancer gone?), a new alias, and looking like he’s been dressed by the Salvation army. How do we know that this is a flash forward? 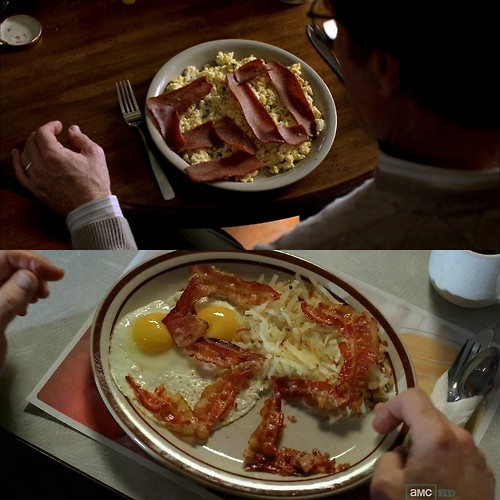 It’s Walter’s 52nd birthday as evidenced by the fact that he takes the bacon strips from his Denny’s breakfast and makes a 52 out of them. If you remember during the pilot, Walter makes out a 50 from the veggie bacon that orders so we can conclude that this is 2 years after the opening episode of the series.

After the intro, we come back to see Skyler and Walt Jr. (still a thorn in my side as a viewer) coming back home to see Walt reveling in his victory with a glass of scotch. Skyler reveals to Walt that she is happy to see him alive but that she’s also afraid of him to which Walt has no reaction. Skyler later on in the episode finds out that Ted is still alive from Saul. She rushes to see him at the hospital (hoping that he hasn’t and won’t say a word of what happened to the authorities) to see him in pretty bad shape with a broken neck. Ted, deathly afraid, states that there will be no peeps out of him to anyone about this to which the Godmother Skyler White exclaims “Good”.

Walter, on the other hand, has much bigger problems. He finally remembers that he was videotaped by Gus at the meth lab and there has to be a record of it somewhere. Walt and Jesse track down Mike, who finds out that Gus is dead and is none too pleased, and tell him the unfortunate news. Mike reluctantly decides to team up with Walt and Jesse (but not before he scolds Jesse for teaming back up with Walt with a look of disappointment) and they find out that the video is in a laptop that has already been confiscated by a Hank and the police and that they’ll have to break into Albuquerque Evidence Hold in order to destroy the laptop. While Walter and Mike argue back and forth about the sanest way of trying to go about this, Jesse finally gets through to them and asks “What about a magnet?” They purchase a magnet from the local junkyard, execute an elaborate plan (which works but reveals another clue to the police), and are reassured by Walter that everything is fine merely because Walter “said so”. Oooooooh, Walt is REALLY not playing around anymore and he definitely does not give a fuck. One of the things that I really enjoyed about the episode is how Vince Gilligan used the big magnet as a metaphor for Walter White. Jesse, Mike, Saul, and Skyler are all being sucked in by Walter’s magnetic pull, getting damaged (or compromised), and find it difficult to get away from the pull. They are all being drawn closer and closer until all of them are destroyed in the process. I really hope this isn’t the case since I really like Jesse, Mike, and Saul (and, to a lesser extent, Skyler) and have grown attached to them but this definitely seems like a form of foreshadowing. This is emphasized in the next scene where Saul explains to Walt what happened with Skyler and Ted. Walt gets upset about how Saul is talking down to him and when Saul tries to end the partnership, Walt gets in his grill and tells him “This isn’t over until I say it’s over”. Well, we got ourselves a bad ass over here!

The episode concludes with Walt coming home and Skyler telling him that Ted isn’t going to say a word. Walt walks up to her with a poker face, embraces her, and whispers in her ear “I forgive you”. Whoa. Did anyone else miss the apology here or is Walter gassed up like OPEC? From the look of terror on Skyler’s face, you can tell it’s the latter. And oh my, how the tables have turned. A season ago, it was Skyler talking down to Walter while he acted sheepishly and annoyed but now? A complete 180 has happened to their roles. Walter’s in charge now and he’s letting everyone know. Boy, is it going to suck to be everyone.