Phillies Fan Tries To Drink His Beer Through Shirt 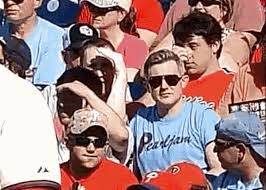 See more after the jump: END_OF_DOCUMENT_TOKEN_TO_BE_REPLACED

Josh Donaldson, the Oakland Athletics’ starting third baseman has had an All-Star caliber season so far.

On the year, Donaldson hast a .324 batting average, and his hit 8 home runs and driven in 33 runs.

While these numbers are impressive, they aren’t the most impressive thing Donaldson has done this season.

Check out this video of what Donaldson did in batting practice before last night’s game, and focus in on his reaction.

END_OF_DOCUMENT_TOKEN_TO_BE_REPLACED

It’s nicknamed “The Monster Mile” and on Sunday afternoon, 43 drivers will find out just how hard Miles the Monster can bite. This 1 mile concrete track, known as Dover International Speedway, is located in Dover, Delaware and has been holding events since it’s opening in 1969. The track has 24 degrees of banking in the turns and 9 degrees of banking on the straights.

Last year, Jimmie Johnson dominated and was able to capture his second victory of the season. The win was Hendrick Motorsports fourth straight victory. Will Hendrick be able to dominate yet again this year?

Coverage for the FedEx 400 benefiting Autism Speaks starts with the pre-race on Fox starting at 12:30pm EST. Gloriana will perform the national anthem, while there is no word on who will give the command for the race.  END_OF_DOCUMENT_TOKEN_TO_BE_REPLACED

After the Indiana Pacers defeated the Miami Heat Saturday night to extend their series to a game 7, Pacers Center Roy Hibbert dropped a “Ya’ll Motherfu—rs (the media) don’t watch up play”  when answering about hit Defensive Player of the Year votes and “No Homo” when answering a question about LeBron James scoring. It’s beyond hysterical, but I am sure that Mr. Hibbert will be getting a hefty fine from David Stern.

Check out the videos after the jump

END_OF_DOCUMENT_TOKEN_TO_BE_REPLACED

Bio: Another prospect, another Cardinal. That is not the only similarity between Shelby Miller and Wacha, as they both hail from Texas. Again, he was also accepted to play at Texas A&M, but unlike Miller, elected to play college ball. In his final season, END_OF_DOCUMENT_TOKEN_TO_BE_REPLACED

4-Year-Old Frustrated Mets Fan Cries, Admits He Is A Front-Runner

Too many times I have seen people I know jump on bandwagons, ditching te teams they “loved”. I might dislike fans of rival teams, but I hate flip floppers and front-runners.

This video is hilarious and definitely worth your time. END_OF_DOCUMENT_TOKEN_TO_BE_REPLACED